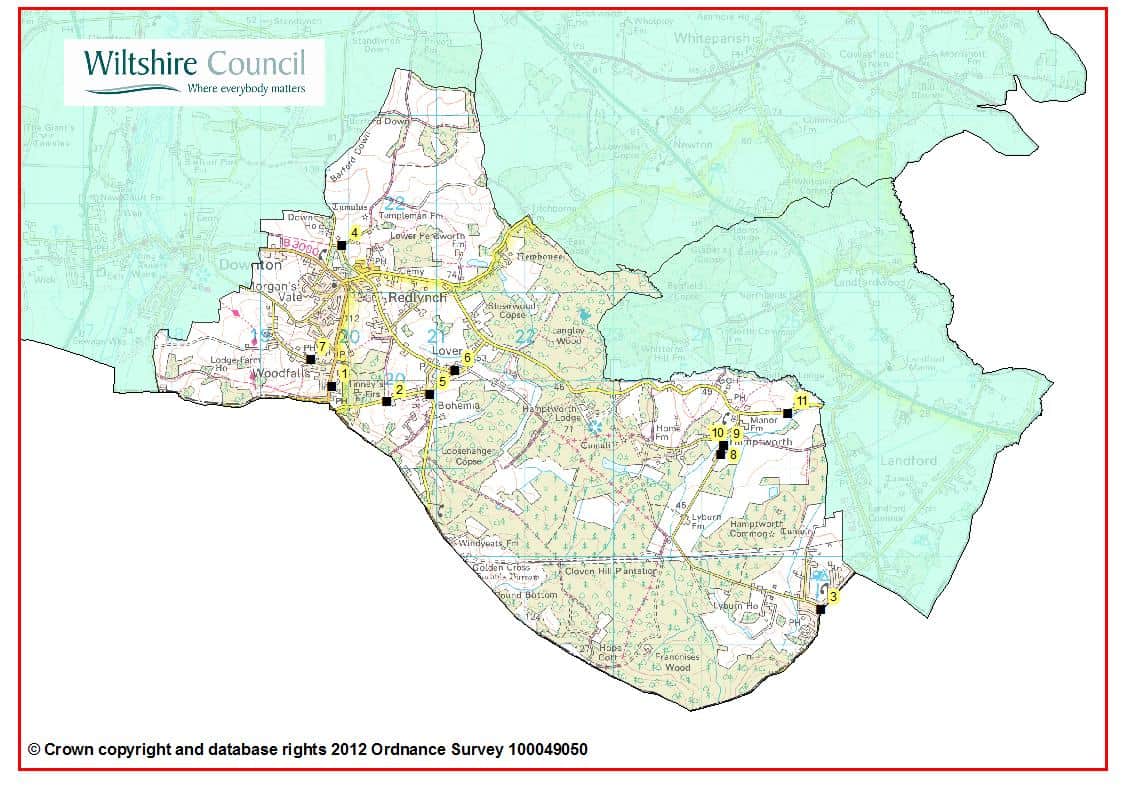 Redlynch is a modern civil parish in the far south east of the county of Wiltshire, bordering the New Forest. Most of it was part of the Saxon estate of Downton and later became the eastern part of the parish of Downton.

The modern parish contains the settlements of Morgan’s Vale, Woodfalls, Hamptworth, Nomansland and Redlynch, which includes Lover, formerly Warminster Green, and Bohemia. Much of the area was only lightly settled until the late 18th century and most houses date from the 20th century or the second half of the 19th century. The civil parish of Redlynch was created in 1896 and in 1934 Morgan’s Vale, Woodfalls and Nomansland were transferred to it.

Geologically there is a series of rocks running roughly south-west to north-east. Part of Morgan’s Vale and one area in the north-west of the parish are on chalk with areas of plateau gravel. Woodfalls and Redlynch and a narrow strip running to the north-east are on Reading Beds with areas of plateau gravel. There is a broad band of London clay covering the area of Lover, Bohemia, Langley Wood and East Copse while Loosehanger is on Bagshot or Whitecliff Sand. Further east it is more complex with Hamptworth on river terrace deposits while Hamptworth Common is on the Brocklesham Beds and Nomansland on Selsey Sand. Within all of this there are streams in small valleys with valley gravels in their beds.

Much of the area was forested, it was within the Forest of Melchet until 1377; later there was much rough pasture and some areas were ploughed. It is unlikely that there was any prolonged prehistoric settlement here although Bronze Age burial sites were uncovered in the past. Doubtless this area came under the Roman village at Downton and it is likely that the succeeding Saxons used the wooded areas for hunting and as a feeding ground for pigs.

The whole area is included in the Downton estate in the Domesday Book but Redlynch probably only consisted of a scatter of hovels at that time and the whole population may have been no more than 50 or 60. In the 12th century Pensworth was created by land enclosure by the Rector of Downton. Farms were strung out along the road north of Grove Copse. No church was built and land to the south remained open pasture land and heath.

By the early 13th century settlement was still very light and scattered and probably only Pensworth and Hamptworth were nucleated communities. Manor Farm at Hamptworth is of medieval origin and the settlement if first mentioned by name in 1306. In 1251/2 a ditch was dug at Loosehanger to protect newly ploughed land from deer while around this time Timber Hill and Milk Hill were enclosed, probably by ‘squatters’. Woodfalls is mentioned in the 13th century and chalkland in the western part of Morgan’s Vale and Woodfalls was enclosed, although Paccombe Common remained open until 1822. At this time, and for the centuries following, sheep and corn husbandry was practised in the non-wooded areas.

By the early 14th century Pensworth was of reasonable size and was prosperous, although it had declined by the mid 15th century and had lost its identity in the 16th century; eventually the name was only retained in two farms. In 1334 Hamptworth was as wealthy as the Avon Valley villages around Downton and probably remained a reasonable sized settlement. There seems to have been little development in the 15th and 16th centuries although new smallholdings were probably established while others continued or fell into disuse. Doubtless there were semi-permanent dwellings for charcoal burners, coppice cutters and other men who used the woodlands for their raw material.

Loosehanger Park was enclosed in the 17th century and although much of the land was used for the poorer inhabitants the present house was built there at this time, the porch is dated 1655. Newhouse, in Whiteparish, was built by 1619, possibly as a hunting lodge for Sir Edward Gorges of Langford Castle. By this Hamptworth was made up of farmsteads strung out along the Langley Wood to Landford road (it remained so until the 19th century), and Pensworth had gone. It is probably true to say that there was little nucleated settlement in the 17th century although there must have been some concentration of dwellings at Redlynch itself.

By 1700 lacemaking had become a cottage industry at Redlynch and during the century more houses were built in this area. Brick kilns were operating on the western side of Kiln Road and to the south of Hart Hill and these made high quality bricks for the good 18th century houses of Downton. Lime kilns were also operating in the parish at this time. By 1773, on the Andrews and Dury Map of Wiltshire, the settlement pattern was mainly along roads and at the edges of commons. This included Black Lane at Redlynch, a small area at Bohemia, scattered farmsteads at Hamptworth, the lower part of Morgan’s Vale Road, a line of cottages at Woodfalls and a few farms in otherwise unpopulated areas. At the end of the century settlement on common land at Nomansland began.

[Lamb Inn, Nomansland] Nomansland can be said to have officially started life on 23 October 1802 by the discharge of an encroachment case, when it was decided that the area was not in the New Forest. John Shergold was alleged to have erected a charcoal burner’s cabin on the King’s land in c.1795; this is believed to have been on the site of the present Boundary Cottage. It is believed that other settlers moved in shortly after this decision and built mud houses (clay and chopped heather) with thatched roofs. By 1817 there were houses in an area named South Lane and it is likely that the early houses were built by single men, who married after they had established themselves. The Cuckoo Inn was built at Hamptworth in 1800 and the settlement at Bohemia began to grow early in the century. By 1841 Morgan’s Vale was recognised as a village in the triangular shaped common between Ridge and Vale roads.

Commons were enclosed in 1822 and some of the land was divided into small allotments for building, otherwise much of the earlier 19th century was a period of rebuilding existing houses. Focal points were around the road junctions at the top of Princes’ Hill, Redlynch, and at Warminster Green (now Lover). A church was built at Warminster Green in 1837 and this was followed by a school in 1839. At this time Redlynch had smithies and a foundry while broom making was a traditional local trade that continued until the Second World War. There were two brickworks at Morgan’s Vale in 1837, which later closed and were replaced by another in 1900 that continued until c.1953. Woodfalls had an iron foundry by 1855, which, as the New Forest Ironworks, was in business from c.1875 to c.1939. In the mid 19th century many people at Morgan’s Vale and Woodfalls were involved in lacemaking or shoemaking.

Thus the area was expanding in population, employment and amenities and to serve the growing workforce the King’s Head was open by 1848. Nomansland became a civil parish in 1857 (it did not become part of Redlynch until 1934) and in 1867 a school was opened at Hamptworth. Two years later a school opened in Morgan’s Vale and this was licensed for worship, as the village did not have a church until 1896. Public houses and churches were both opened as the population increased with the Forester’s Arms being built in 1872 and the Lamb at Nomansland opened in 1881 while a mission hall was built in the 1880s. By 1876 Warminster Green was known as Lover, possibly a corruption of Lower Redlynch and Morgan’s Vale was the official name for that village; previously it had been known as Morgan’s Bottom, which would not have appealed to Victorian sensibility.

[Old Inn, Woodfalls] In the later 19th century there was further development at Woodfalls and the New Inn was re-fronted and renamed the Old Inn. The settlement pattern at Hamptworth began to change when a new road, Lyburn Road, was built, increasing settlement at Hamptworth Green and other areas. In Redlynch a house with an attached reading room was built in Bower’s Hill in 1899, while a village hall, reading room and library was built in North Lane, Nomansland in 1910. Redlynch church hall was erected at the bottom of Church Hill in 1912 and Morgan’s Vale church hall built at The Ridge in 1920.

During the first part of the 20th century housing increased in all the previously settled area and became concentrated on the former commons in Redlynch. By mid century there were council houses between Orchard Road and The Ridge plus several small private estates in the area of Morgan’s Vale. Today the parish is a very interesting example of a former forested area that has only been populated to any great extent over the last two centuries.